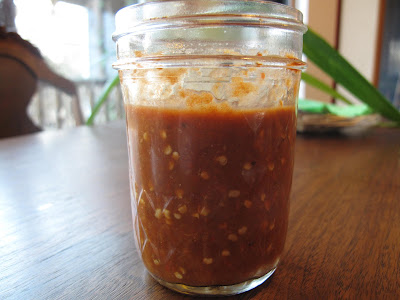 i'll remember this recipe when i'm harvesting my peppers next fall. maybe i'll throw in a few habaneros, too. thanks!

I follow your mom's blog and always read your posts when she mentions you have a new one up.
My hubby and I were just making our shopping list this morning and tried to only list those things that we couldn't make ourselves. We cut our pre-made stuff list in half!! I, like you, had NO idea I could make BP. One more thing to take off the list:) Yeah! Thank you.

You are always an inspiration to me in cooking. I find myself wanting to measure up to you and I appreciate you being so devoted to keeping your food as local as possible. It is really important to support our local farms and to eat food grown close to home is so much healthier. We are also undergoing the process of whittling down those items we can make around our house and appreciating how much better they are for us and for our environment both earth environment and home. Thank you, Sarah, for being the mom you are and teaching those kiddo's early on the importance of balance and keep those recipes coming! I will most def be making my own baking powder from here on out and I can't wait to tell Jason I've got a hot sauce recipe that we will make with peppers we grow in the garden. Be prepared... I'm going to hit you up for some recipes come summer!

I had no idea you could make baking powder. I love that! I used a homemade baking powder mix from this site - http://chickensintheroad.com/ and was so pleased to be using your recipe for the baking powder in it.

Hey Sarah! Long time, no chat. Any luck canning this? Seems like you should be able to with the vinegar in it. If you have any ideas, please chime in :).

Holly, I never gave canning it a try, but I would think it would very well.