The Golden Grain of Salt 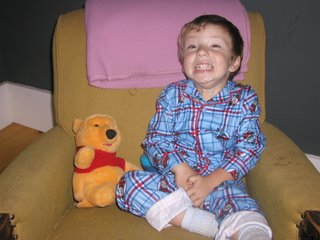 Somehow, even with all that went wrong this year, I'm apparently genetically incapable of thinking it was a bad year. After all, how can any year spent with Odd Toddler be bad? So I keep getting the Tori Amos "Pretty Good Year" song in my head every time I think about waving goodbye to 2006.

I've never been big on New Year's Resolutions, but still have tended to make a half-hearted attempt each year. Resolving NOT to do something, or to ALWAYS do something seemed to be too self-limiting and weirdly negative, so I long ago found a way around it. Most years, my resolutions would be something fun and easily accomplished, like "This year I will visit a new city," or "I will take a non-credit short course through the continuing education center and learn something new." Last New Year's Eve, I was 13 weeks pregnant and feeling great. I called mom, laughing, and said "I've got it. I know what my New Year's Resolution will be. In 2006, I resolve to give birth to my second child." (See, it never occurs to me that something can go wrong). Three weeks later, I gave birth to a stillborn preemie. Six months later, I had a miscarriage. And three-and-a-half months after that, I miscarried again.

I thought about trying again on the same resolution this year, but I'd rather not set myself up for failure. We're still gunning for that elusive second child, but The Carnivore and I have both found some sort of peace with the whole debacle now and it isn't something I feel comfortable making a resolution about. If anything, all of this has implanted some new sensitivity gene in me (something I always used to be woefully lacking in), and has made me even more desperately thankful for what I DO have.

Regardless, we have had a good year in spite of it all. Business has been good for The Carnivore, and Odd Toddler has become more fun, more interesting (and more odd) with every passing day. I wouldn't trade a minute of my life, but at the same time I'm excited about the new year as well. New adventures with Odd Toddler, new projects around the house and land, and of course, always the possibility of a new baby. But here I am, staring down the face of a new year, and wondering if I should have a resolution at all. It seems like cheating to not resolve to do SOMETHING, so I thought myself to be incredibly clever when I came up with [what I thought was] something great. I stood in front of Big Mama, and announced, "I've got it. I have a New Year's Resolution. This year, I resolve to try a new recipe." She stared blankly at me for a moment, and then hesitantly repeated what I had said, "You're going to try a new recipe." "Yeah," I replied, excitedly, "See, I try new recipes all the time, so this way I can't fail." She looked at me a little longer, and then nodded and walked away.

Next, I went to The Carnivore. "I have a New Year's Resolution ready. This year, I resolve to try a new recipe." I got another blank stare in return. One hand stroking the back of his head, he then looked mildly crestfallen and asked, "Only one new recipe? All year?" "Nooooooo," I answered, "I just mean that I can knock out my resolution early. I'll be sure to try a new recipe by the end of the day on January 1st, which means I can already scratch it off my list and be done." "Hmmmm," he said absentmindedly, and ducked back behind his newspaper.

This time of year, I love reading everyone's annual "Best of..." lists. You know, Top 10 books of 2006, Top 10 albums of the year, and so forth (and thank God we are well past the beginning of the new millenium when we had to endure all those bloody long-winded Best of The Century lists). In yesterday's AJC Food Section, they gave their annual Golden Whisk Awards, and I had one of my completely absurd "Eureka!" moments. Instead of planning for the New Year, I will embrace the old year. Thus, this year, I will give out my first annual Golden Grain of Salt Award to the best new recipe that I've tried from a newspaper, magazine, or cookbook. These won't be recipes that I have developed (I can't give an award to myself), but will be recipes that I have clipped, cooked, and loved. The awards committee will consist of me and The Carnivore, and possibly some small weight will be given to Odd Toddler's demanding palate, but I doubt it.

It is entirely possible that I'm taking myself too darn seriously, but hey, if you don't like it, you can always get your own blog.

And so, without enough fanfare, The Carnivore and I are proud to announce that the 2006 First Annual Golden Grain of Salt Award goes to Rustic Bread with Dark Chocolate, Olive Oil and Salt. I first found this recipe early this year in an article on chocolate in the AJC Food Section. The recipe published in the newspaper was adapted from Tapas: A Taste of Spain in America by Jose Andres with Richard Wolffe. And, interestingly, an even more (and I think overly) adapted version made it into the 2006 Golden Whisk Awards.

I first made this for The Carnivore back in March (I think) and we were hooked from the first bite. The interplay between the bittersweet chocolate and the large granules of salt was beautiful in and of itself, but the addition of the glossy and slightly fruity olive oil created an unbelievably complex and totally unexpected flavor. A month or so later, I made this for my mother-in-law and she raved about it too (proving that The Carnivore and I don't just have weird tastes - I think). The recipe is easy enough to make on any old weeknight, but would even be elegant enough for a dinner party dessert.

The recipe calls for a rustic bread (thick crust, light interior) and this caused me some grief at first. I stood around at the bakery for a few minutes, shuffling my feet and asking questions until someone suggested ciabatta bread (which can be found in the Publix bakery and most small local bakeries), which turned out to be perfect. According to the published recipe from the AJC, sourdough would be too dense.

My next point of contention was with the chocolate. The recipe simply specified dark chocolate, but the grocery stores are slap full of choices now and it can become a bit overwhelming. Where you used to find milk chocolate, semi-sweet chocolate and dark chocolate, you are now bombarded with various percentages of cocoa and even geographical choices. Naturally, I have tasted my way down this entire grocery store aisle now, and can safely recommend the mild (not too bitter, not too cloyingly sweet) and easily obtainable 60% cacao dark chocolate. There are many brands, and I'm partial to Lindt, though I can be just as happy with Ghirardelli. Word of caution: the 85% cacao dark chocolate is more bitter than an unroasted coffee bean, and has the approximate consistency of dirt (and frankly doesn't taste much better). Avoid it if you can.