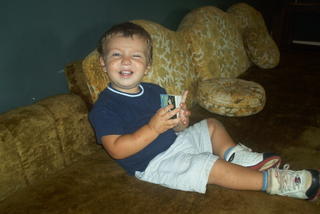 Things have gotten out of hand with the whole quest for The Perfect Risotto. All of the recipes that I have tried have been great (attempt #1 and attempt #2 previously written about), and there has been no need to continue trying to reinvent the wheel. But I'm doing it anyway.

As if the Risotto Walkabout weren't enough, I have also found myself obsessed lately with blue cheese. And, since The Carnivore loves blue cheese AND risotto, I felt like the mad scientist when I ran across a recipe for, you guessed it, Blue Cheese Risotto. Never mind that the combination sounds odd simply in the reading, this was a mountain I had to climb.

The recipe was from the "From the Restaurant Of..." section in the Atlanta Journal-Constitution Food Section from a month or so ago. I love this column and almost always try the recipes, provided that they are either vegetarian or can be converted as such. This particular column was about Garrison's Broiler and Tap in Atlanta, a restaurant I have never been to, much less heard of.

I served the risotto a few nights ago, alongside pan-fried tilapia. In hindsight, I'm not entirely sure these two dishes went well together, especially since the fish itself was so highly seasoned. The risotto was incredibly rich and so strongly flavored that I think it just hasn't yet found its place in our menu. Maybe it would do better as a bed for grilled vegetables, or maybe served beside a salmon steak drizzled with lemon... I'll have to think on this.

The original recipe called for chicken stock, which was easily replaced by vegetable broth. The tricky part was that the recipe also called for bacon (and the use of the bacon drippings). This took some finessing for me since I've never actually cooked bacon and have no idea of what it even tastes like. To make up for the lack of drippings, I added an extra Tbs of butter. And, while the white wine in the recipe is supposed to be used to deglaze the bacon pan, I didn't want to scrimp on flavor and so used the wine even though I had no deglazing to actually do.