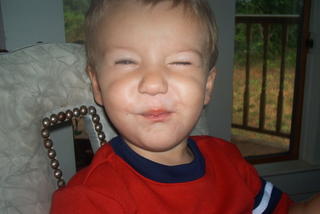 I am apparently only capable of doing so many things food-related before I hit overload. I can make food, I can write about food and I can read about food, but not all at the same time. Lately I've been in a reading-about-cooking kind of place, and whether there aren't enough hours in the day or whether its a matter of stage fright after reading the masters, I haven't recently felt the urge to write about food as long as I'm busy reading somebody else's food memoirs. Especially when its as thrilling and downright trashy as Kitchen Confidential. I am of course watching the television show as well, though it pales in comparison to the book (as is almost always the case).

I spent much of Sunday afternoon reading out loud to The Carnivore. I quoted entire pages, hooted with the hilarity of it all, and brimmed over with newfound knowledge. Most of the book requires Google's vast translator abilities (because we can't ALL speak New York kitchenese) and now I keep wanting to try out my new vocabulary. Alas, I'm having a hard time working "mise-en-place" into casual conversation.

In the restaurant expose (where is the accent mark that goes over the final letter when trying to sound like 60 Minutes?) section, the author goes into a tirade on my people:

"Vegetarians, and their Hezbollah-like splinter faction, the vegans, are a persistent irritant to any chef worth a damn. To me, life without veal stock, pork fat, sausage, organ meat, demi-glace or even stinky cheese is a life not worth living. Vegetarians are the enemy of everything good and decent in the human spirit, an affront to all I stand for, the pure enjoyment of food. The
body, these waterheads imagine, is a temple that should not be polluted by animal protein. It's healthier, they insist, though every vegetarian waiter I've worked with is brought down by any rumor of a cold. Oh, I'll accommodate them, I'll rummage around for something to feed them, for a "vegetarian plate," if called on to do so. Fourteen dollars for a few slices of
grilled eggplant and zucchini suits my food cost fine."

The man is a former heroin-addict who writes like he's on a cocaine bender (see also: Elizabeth Wurtzel), so its hard to be insulted by his rantings. And besides, since I eat seafood and dairy, I can at least pretend I might be cool enough to run in his Big City chef circles. As if.

Regardless, I had one of those rare Sarah-might-grow-up-to-be-a-chef-after-all epiphanies this week, and I'm excited by the feeling of invincibility it has instilled. A few weeks back, when I was dragging around with a sinus infection and feeling more than a little sorry for myself, I skulked through the living room and glanced at the television, where Giada de Laurentiis was licking her lips and spreading some sort of gruyere and mustard concoction on thick hearty slices of sourdough bread. I sat on the coffee table (a no-no), transfixed and eager to see what she was making. I was disheartened when she slapped some turkey on the magnificent-sounding cheese spread, but was intrigued again when she pan-fried the sandwiches in olive oil. Doped up on pain medicine, I headed straight upstairs to download the recipe.

I mulled over the turkey issue for the past week or so. The sandwich was so simple that I couldn't do what I often resort to, which is just skipping the meat and continuing with the rest of the recipe. After all, that would result in nothing more than a fancy-schmancy grilled cheese sandwich in this case.

And then came one of those inspirations I've been praying would begin to come naturally for me, that Aha! moment when you realize how to take a completely unusable recipe and make it your own.

These sandwiches were out of this world yummy. Even The Carnivore agreed, though I had suspected he would have a problem with substituting roasted peppers for turkey. Sadly, I served the sandwiches with Broccoli & Cheese Soup (a little too much cheese in this meal, thanks anyway) and the soup couldn't really hold its own against the beauty of the panini. Gonna have to try out some new soup recipes. Especially now that I've read how easy it is to make your own broth for soup bases (though Anthony Bourdain would shudder to know that I will be bastardizing it by making it vegetarian, of course).

Also, as a thank you for visiting my site, I'd like to tell you about a great site that is giving away a FREE DVD Camcorder! Just click the following link and enter your Zipcode to see if the promotion is available in your area!