The Fastest Way to a Toddler's Heart... 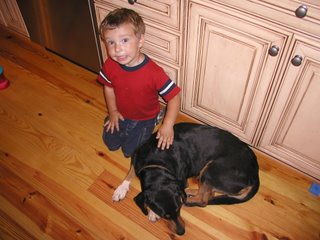 Feeding Odd Toddler has become more of a challenge than I had hoped. I had grown accustomed to him walking around with his mouth open all the time, which made it incredibly easy to offer the chubby little child a varied diet. In those days, I hardly batted an eye over any junk food, knowing it was counterbalanced by any number of healthier items over the course of the day. Not so, any longer. The little guy seems to subsist now on maybe fifteen bites of food per day. He is very active, and though I have seen this play out in plenty of other children, nothing seems scarier to me than watching a toddler slim down, especially when I can’t figure out how he gets by on so little food to begin with. Obviously now, every little bite counts.

Odd Toddler drinks organic whole milk all day long, supplemented by water and the occasional smoothie I whip up to increase his fruit intake. For now at least sodas and juice are fights I can postpone a little bit longer. And, of course, I have had him taking children’s multi-vitamins since he was weaned from the breast. Obviously he isn't wasting away, but I can't help but become hyper-vigilant about his diet.

Meal planning has become more creative, to say the least. Since I have such tiny bird-like meals in which to fit in his nutritive vegetable, fruit, and fiber needs, I am having to focus with a single-minded concentration that nearly sends me over the obsessive edge. To save my sanity, and to not become a Snack Nazi, my latest child-feeding goal has centered on making typical child-friendly foods in a more healthful manner. Like all red-blooded American children, Odd Toddler loves French fries more than life itself (and gummy candies, but that’s a different battlefield altogether). I realize there are snacks much more evil than oven-baked pre-packaged frozen French fries, but I’d be hard pressed to find something that I find more disgusting, and so it was time to improve upon them...

I needed a side dish for last night's meal anyhow, and had been waffling for a couple of days over the best counterpoint to a catfish Po-boy dinner, when I had one of those sweet “Eureka!” moments. I remembered a recipe for Spicy Potato Wedges that I’d been dragging around for a long while, waiting for the right opportunity, and so I dug around the kitchen until I got my hands on it early yesterday morning. Alas, the recipe involved grilling, and I wasn’t in the mood. I’ve read countless variations of the standard toss-potato-wedges-with-olive-oil-and-bake recipe, but I’m always wary to try something the first time without better guidelines than my faulty memory can provide. So I pulled out my trusty How to Cook Everything, and was disappointed to find only one French fry recipe, which sadly involved deep frying (which would, of course, defeat the whole purpose here).

So there I stood, hands on hips, sneering at the cookbook shelf for nearly fifteen minutes as I pulled down useless cookbook after useless cookbook, relatively embarassed that I had never attempted to make french fries from scratch before now. Finally, too frustrated to continue the manual search any longer, I fired up the laptop and went to the Cooking Light website where I was chagrined to find that a search for “French fries” yielded nothing. Nada. Not one single recipe. Out of possibly tens of thousands of recipes in their archives, I didn't get the first hit.

I scratched my head for a minute, fiddled with a pen, tapped my feet, mumbled, and typed “potato wedges” into the search. Unbelievablly, I received innumerable possible recipes in the results window. Figures. The first recipe I clicked on looked like a winner, and I already had all the herbs and spices on hand.

So last night, with Odd Toddler looking on hopefully, I rolled up my sleeves and tackled what I assumed would be the difficult task of carving two large potatoes into French-fry-looking shapes, but which turned out to actually be fun. After no more than 10 minutes of prep (including the time it took to admire a spider that Odd Toddler brought to me, unstick two of his stubborn Legos during a tower-building fit, and refill his sippy cup), the fries were in the oven and I was free to prep and assemble the rest of our dinner. So far, so good.

Odd Toddler ate two plates of them, and The Carnivore yummed himself through quite a few as well. I feel like I've won the lottery (or finally passed Remedial Cooking for Dummies).

Without a doubt, PMS (or pregnancy cravings) will now become easier to deal with.

These sound delicous!! Hopefully I can get my children to say Hold the Ketchup. Thanks for sharing