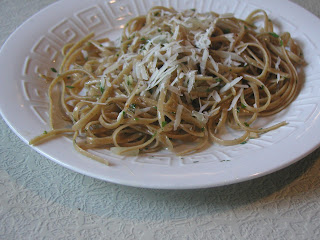 It’s tough being a constant contradiction to myself. I don’t eat red meat or chicken, but I have found Vegetarian Times magazine to piss me off so much politically that I just get cranky when I try to read it. Not to mention that most recipes in most vegetarian publications tend to be long on beans and tofu, but short on flavor. I’ve never understood why the word “vegetarian” connotes “tasteless” to most people. I run into this same issue with cookbooks that are strictly vegetarian, with the lonely exceptions of The Moosewood Restaurant and The Grit cookbooks.

And as much as I strive to eat healthfully, Cooking Light magazine is beginning to grate on me with its tendency to use cooking spray instead of olive oil, and egg substitute instead of real eggs. I mean, I totally understand the point of saving some calories, but if you have to sacrifice REAL FOOD and rely on chemical imitations, then you’re missing the point of healthy eating, at least in my book.

Maybe I’m just middle of the road, but I think a little moderation would solve all of these problems. I don’t eat an excess of high fat foods, but I also don’t count calories either. I don’t skip dessert, but I do tend to eat 1 ounce of bittersweet dark chocolate rather than, say, a candy bar or a doughnut. Read: higher antioxidants, less saturated fat. And far more flavor. You can eat healthfully without depriving yourself.

I have nothing personally against eggs, and I steadfastly refuse to use egg substitute because I can’t figure out what the heck it is. Doubly troubling is that I have to discard any recipe that calls for egg substitute because (get this) I don’t know the proportions for substituting real eggs for egg substitute. Asinine? Yes. I have also found that with Cooking Light recipes that call for cooking spray in sautés, the final product tends to be bland and pointless. Look, I can save a lot more calories by just not eating the flavorless recipe in the first place. I still read Cooking Light, cover to cover, but I do it more now for the articles about food and cooking techniques than I do for the recipes.

I’ve sat in the bookstore and thumbed through the crazily diversified selection of foodie magazines, looking for more inspiration, but I’ve been mostly disappointed and just haven’t wanted to waste my money. For the most part, I continue to get most of my recipes from yard sale cookbooks, websites and the AJC Food Section. But there are few things I enjoy more than spending 30 minutes drinking a cup of tea and reading a truly interesting article in a cooking publication. I have a lot to learn, and I’m downright hungry for the knowledge.

Bon Apetit is too snooty for me, and Gourmet focuses too much on meat. The little mini-sized Rachel Ray and Martha Stewart magazines have recipes, but no real articles to read (lots of pictures, very few words). I’ve looked longingly at Fine Cooking many times while in the checkout line, and despite how completely fascinating I find the articles, the cover price has been too much of an obstacle for me to get past. I would just hate to spend seven dollars and then not find a single recipe that I wanted to try. Nothing drives me crazier than wasting money. I am cheap. I can’t help it.

But then two of my favorite people gave me a couple of recent issues of Fine Cooking and I was downright hooked. It was during one of those weekends where Odd Toddler shadowed The Carnivore around every waking minute and I found myself with unexpected time on my hands. I cleaned the house in record time, made a French-press pot of coffee, and went out to the porch swing where I read EVERY SINGLE WORD of every single article (including the ones about meat – hey, I pass on tips and techniques to The Carnivore that are much appreciated). The product review and the reader tip sections were unsurpassed, but I also found a good five or six recipes that looked worth trying, and I picked up some great information in an article on fresh basil (I have a love affair with basil). I couldn’t wait to try a couple of recipes and see whether the recipes would live up to the beauty of the writing.

Indeed. I haven’t been disappointed yet. The beauty of the Fine Cooking recipes, I have discovered, is that they use fresh ingredients, intriguing combinations, and overall tend to be quite healthy, but they aren’t scared of using butter or olive oil. And nowhere in the three issues that I’ve read so far is any mention of bloody egg substitute. Even better, the recipes aren’t overly complicated, and a few of them have been delightfully quick and easy. My favorite recipe so far has been a linguine recipe that has been easy to fit into my repertoire (which generally revolves around Italian food anyway) and is quick enough that I can throw it together on a weeknight with a salad and fresh vinaigrette along with a side of lemon-basil bruschetta. Amazingly, this dish has been a hit with everyone from my one-year-old nephew to my mother. And yes, The Carnivore and Odd Toddler are HUGE fans as well. But yeah, I have cut down the amount of butter originally called for in the recipe. 'Cause remember, its much easier to lower the fat in a recipe than it is to add it back in again.

To the Cooking Guru - my requests (and not necessarily all together)
1) Isn't it soup season again?
2) I love cilantro
3) there's another salad dressing out there that you make thats yellow..and has pepper...and I had to elbow your mom to get it away from her last thanksgiving

Have you tried Taste of Home magazine?

So glad that you are enjoying the Fine Cooking. I knew it'd be just the thing for you as you are a serious cook and would appreciate the real fats and lack of egg substitute. It's my hope that your dream of publishing a cookbook will happen someday. I will be your first customer. Eventually I'm going to make my way down south for a visit and I intend to spend an afternoon on your porch swing talking food with you and swapping recipes. And btw, yes, you did embarass the heck outta me.

Since my husband had a heart attack and 6 by-passes I have to go easy on the eggs. I just use egg whites but lots of olive oil.
Emily C/