For the Love of Arugula 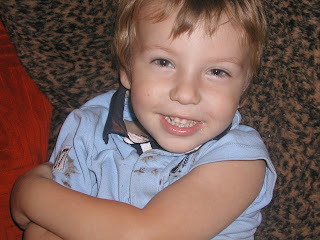 As hard as it may be for me to admit, sometimes convenience and efficiency are the name of the game. I’m a work-at-home mother of a three-year-old little boy, I’m 22 weeks pregnant, I’m obsessive about a clean house, and I have a large family which comes with its own set of demands. Occasionally, this will mean that it’s a tad bit difficult to pull together a complete gourmet dinner in time for our uncommonly-early dinner hour. But it would kill me to just open up a box of Tuna Helper, or to stop by the store and pick up something pre-made from the deli. That would be like losing my religion. Publicly, no less, since I tend to flog myself in open forums when I feel I’m falling down on the job.
Normally, this isn’t much of an issue for us anymore. I’ve cut back even more on my client-load, and since The Carnivore tends to come home around 4pm and is thus available to hang out and play with Odd Toddler, I’m freed up for an hour or so to get dinner together. Plus, now that we’re participating in the CSA and are getting weekly share boxes of amazingly flavorful, just-picked produce, I’ve been leaning towards slightly simpler meals in order to let the freshness shine through. After all, it would seem a shame to overcook a beautiful piece of zucchini into limp submission when a quick toss in olive oil and sea salt over a grill pan for 3 minutes is all that’s needed to bring out the best texture and the sweetest flavor.
Last week though, The Carnivore pulled twelve hour days for five days in a row, which meant Odd Toddler was out of sorts from missing Papa, I was a little bedraggled from tending to Odd Toddler’s every demand from morning to night, and it was difficult to even find time to cook, much less make a dinner in which Odd Toddler and I could eat early, and which The Carnivore could easily re-heat when he straggled in the door, late and exhausted. I have a few go-to, quick-and-easy, ingredients-always-on-hand recipes in my repertoire anyway, for those days when everything goes wrong and time is of the essence, but they are the kinds of things that work in any season and don’t take advantage of fresh ingredients (like French toast and cheese grits or linguine with clam sauce). The quantity of produce we receive in our weekly CSA share boxes demands that I find creative ways to use at least one item in each meal, so it can be a bit challenging to not only use the fresh vegetables but to also do so in a quick-cook, satisfying, easily reheated meal.
And I love a challenge.
At some point late in the week, I got a later than anticipated start on dinner and realized at the last minute that the pasta dish I had planned wasn’t going to work out after all since I was out of tomato sauce (and tomatoes aren't yet in season around here). I thought about a pesto sauce, but was also out of basil. And when I leaned towards clam sauce, I saw that I was out of parsley. I had a few options still left to me when I remembered a recipe I had seen in Giada de Laurentiis’ Everday Italian cookbook for an arugula pesto. I love arugula, a spicy, peppery type of lettuce that is delicious in Mediterranean-style dishes, and lo and behold, I had received a large bag of it in the last share box.
Eureka.
All the other ingredients in the recipe were things I keep in the pantry at all times, and in the kind of heat we’ve had here for the past few days, a light pasta dish with some crusty bread and a fresh green salad tossed with a homemade vinaigrette sounded perfect for dinner. Since the food processor could be used, Odd Toddler was conscripted into service (since he has ruled that he is now the only person in the household allowed to push the buttons) and together, he and I whipped the pesto together in no time flat. Honestly, it took as long to make the sauce as it would have to open a jar of store-bought pesto and stir it up.
And it was utterly delicious. The pesto was more assertive than the usual variety made with basil, and the spiciness of the arugula really shined through. And I know I’ve said it countless times before, but I’ll say it again: whole-wheat pasta is the way to go. The nutritional value is light years ahead of white pasta, much less slimy, and far more filling (especially with a sauce as light as this one).
ARUGULA PESTO (adapted from Everyday Italian, serves four as an entree)
Posted by Sarah Beam at 1:18 PM

Random question from a random lurker (from your mom's site, where I also lurk). I've always wondered what the point is in salting water for pasta. What does it actually do? Sometimes I do it, sometimes I don't. Sometimes I add oil, sometimes I don't. Always tastes the same to me! (I like to cook but I'm obviously not as gourmet as you! I don't even know what pesto is supposed to taste like. But I do agree with you on the whole wheat pasta, I don't even remember what white tastes like.)

I'm so excited to see this recipe. I just picked up a beautiful bundle of arugula at the farmers market this morning!

Hey there Random Lurker, salting the pasta water is something I learned from reading Bill Buford's Heat (great book) and from watching Everyday Italian on Food Network. Pasta has no taste, and salting the water (a LOT of salt - a Tbs or 2) will flavor the pasta and will help the water become even better tasting and textured if using some of it in the sauce. I never oil my pasta anymore. Oil makes the pasta slick, and then the sauce (whatever sauce you're using) won't stick to the noodles.

My pasta boiling recipe: Bring large pot of water to boil, throw in about 2 Tbs of salt, put in the pasta and immediately stir so that it does not stick, cook to al dente; then either drain into a colander or strain directly into the sauce.