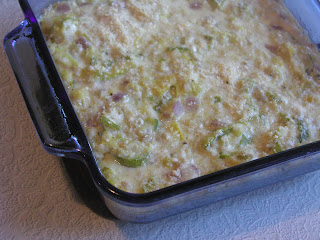 Honest to goodness, New Year’s Day stresses me out. What should be a perfectly relaxing holiday is instead a long and drawn-out day filled with admonitions to begin diets, get organized, start exercising... It’s all very depressing. And it was coming from all sides yesterday. Even the newspaper, instead of focusing on the Iowa Caucus, which is THIS WEEK, wasted scads of paper printing other people’s resolutions (to make the rest of us feel inadequate) and instructions from the experts on how to stick to your own resolutions. Booorrrrrring.

For Christmas, my sister-in-law gave me a Joy of Cooking page-a-day calendar. I’d so been looking forward to starting it and had it sitting out proudly on the menu desk in my kitchen. I’m too much of a stickler to have peeked ahead, so instead of paying any attention to what The Carnivore said when HE read through the first few pages (a week too soon, I might add), I woke up yesterday and ran for the calendar immediately after starting the coffee, eager to learn something new. Imagine my utter dismay when the first page was about how to stick to a diet.

IN A COOKING CALENDAR! I mean, you’ve gotta be kidding me, right? The first page of a cooking calendar is about dieting. What a letdown. I was hoping for a new recipe, or a kitchen tip, or possibly some interesting food fact about New Year’s Day and black-eyed peas. What did I get? A diet tip.

Sure, I know that I'm going to carry very little credibility on this issue. After all, who wants to hear about an aversion to dieting from a skinny chick? Truth be told, I do have to pay attention to my weight, and I often (when I'm not pregnant or nursing) adjust my diet accordingly. And I follow a fairly strict adherence to a policy of moderation. Because I absolutely, steadfastly refuse to swear off ALL the good stuff. That, my friend, is nothing but a recipe for disaster. My favorite diet tip, on any day EXCEPT New Year’s Day (when I clearly don't want to hear anything at all about dieting), is to enjoy everything you like (here’s the key) in moderation.

But then again, I probably shouldn’t be given too much credence. I’m the odd one who adds the fat and calories BACK IN to diet recipes. See, I like healthy cookbooks and cooking magazines; they tend to include more vegetarian-oriented recipes. But, and I know I’ve mentioned this before, I get super cranky about ingredient lists that include fat-free dairy items and egg substitutes. Flavor is too important, and life far too short, for that kind of nonsense.

So I take perfectly good diet recipes, and I get busy negating the ‘diet’ part. Which, um, is probably more ridiculous I think. But in my defense, low-fat and fat-free dairy items are, I swear, the reason I had such bad skin for the 10 years or so that I subscribed to the low-fat diet concept in the late-eighties and early-nineties. And that egg substitute product has far more chemicals in it than an actual egg. Plus, and here is where my science really starts to get faulty, I wholeheartedly maintain that all these fake fat-free foods don’t fill you up for more than 10 minutes. So if you're hungry again immediately, then saving those calories just wasn't worth it then, don't you think?

I know, I know, if I try hard enough, I can justify anything. Parsing words isn’t going to change the fact that what I’m really doing is just adding the flavor back in. Calories and fat grams, be darned. Which brings me to my favorite new recipe…

A recent issue of Cooking Light had a squash-rice casserole recipe that sounded intriguing. And since it, unlike most old-fashioned Southern squash casserole recipes, didn’t call for three or four sticks of butter, I got a little excited. Because even if I added some much-needed fat back into the recipe, it would still be healthier than if it had gobs of butter in it. So I got busy tinkering. I substituted yellow squash for the zucchini, went for vegetable broth in place of the chicken broth (a vegetarian trick I rely on regularly), opted for brown rice in place of white rice (which, by the way, actually made the recipe MORE healthy), used full-fat cheese and full-fat sour cream in place of the reduced-fat and fat-free items called for in the original recipe (important for the flavor, remember), and used whole-wheat breadcrumbs rather than plain old white ones (again, making the finished product MORE healthy).

You see how good I am at justifying my actions. But if you just focus on the brown rice and the whole-wheat breadcrumbs, you can almost (if you stretch yourself) pretend that the extra fat grams from the dairy products are canceled out. And besides, since there is less fat in vegetable broth than in chicken broth, I actually REDUCED the fat in, well, one little tiny ingredient.

Whatever. When I made this casserole for The Carnivore’s family and for my family at Christmas, it got rave reviews. So if you’re counting calories for your (argh) New Year’s Resolution, this may not be the recipe for you.

Thanks for the fattened up squash recipe!

Long story short--I found your blog from reading your mom's--and I am a dietitian who agrees 100% with what you just said about putting the fat and flavor back into foods.

All of the "fake stuff" takes away the pleasure and satiety. The key is totally moderation!