Fried Chevre (or why the Eat Local Challenge doesn't hurt) 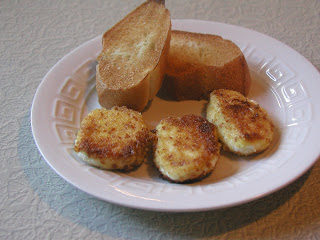 To anyone planning to embark on a month-long Eat Local Challenge, I would strongly encourage you to do some research ahead of time. Scope out your local farmer's market to get a feel for some of the seasonal produce you might normally eschew. Dig deep for recipes to use in your meal planning. Make a list of the items that might give you trouble (flour, meat, dairy, rice and pasta) and search around online for the closest sources of those items. Mercilessly rearrange your pantry and refrigerator to make sure you won't be tempted to scarf down half a bag of dark chocolate chips in a moment of weakness.

Naturally, I can't really speak from experience. I made a decision to join this year's ELC about six days before it began, and since I for some reason chose precisely that moment to get cocky, I did woefully little advance planning.

This is not at all like me. I have a business degree, for pity's sake, and I am annoyingly obsessive with routines, checklists and time management. My recipes are categorized in a large binder that I keep in my menu desk - which, in and of itself, speaks volumes. I mean, the fact that I have a menu desk at all, and a well-used one at that, should evoke some relatively realistic imagery of me perched on my rickety old barstool, with my silly little purple and yellow eyeglasses sliding down my nose, all my recipes spread before me, a beatific expression on my face... No? If you knew me well enough to have spent years rolling your eyes at my patently uncool nerdiness, then this wouldn't be much of a stretch.

It doesn't really matter how long you have putting up with my quirks though, since none of that actually happened (well, other than the silly specs sliding down my nose and the recipes spread hither and yon - that's a common occurence). See, I have gotten so accustomed to cooking from the hip, to using whatever I find in my CSA box, to picking up whatever looks good at the farmer's market, that, like I said, I got cocky. I did do a wee bit of research, ordering some brown rice from a neighboring state, lining up some local, grass-fed beef for The Carnivorous Husband, and spending an inordinate amount of time waffling about purchasing a pasta roller, but in a move utterly out of character for myself, I sat down to make my local co-op order the day before the challenge was to commence and I just blindly picked and chose dairy and produce until I hit my self-imposed budgetary limit. And then the very next day, I started scratching my head and trying to figure out what the heck we were going to eat.

Thus it was that I found myself with the usual items (potatoes, garlic, milk, squash, feta, grits, eggs) and a catterwonky grab bag of other things that, well, I just assumed would be somehow worked into our menus on the fly. Hence the sweet potatoes that became sweet potato chips, the butternut squash that turned into my favorite new pizza, the lone baguette, the errant log of goat cheese, and so on.

But then, in the most unexpected and serendipitous of moments, as I was flipping through an issue of Bon Appetit, I made to pass right by a recipe for a Composed Salad with Fig Vinaigrette. There was a photo, with ginormous and entirely unappealing slabs of prosciutto displayed prominently, and I almost couldn't turn the page fast enough, but then my gaze snapped back to attention when it registered that I had spied some perfect circles of fried chevre nestled rather impetuously atop the offending pork.

Oh, yeah. Fried rounds of goat cheese. If you've never lucked into these luscious and tangy slices of the most exclusive level of heaven, you've missed a lot in life. The Carnivore and I used to order these for an appetizer every single time we ate at the East West Bistro in our pre-parenthood days. They would arrive at the table temptingly warm, crisp and salty on the outside, rich and oozy on the inside. We practically fought over them, setting the medallions astride pieces of hot, crusty baguette and smearing them indelicately over the surface. The textures were just impossibly dichotomous, with the whole of the small and simple dish somehow managing to balance the normally almost overpowering tanginess of goat cheese.

Fried chevre had been one of the last frontiers for me. One of the last remaining restaurant dishes that I assumed was too difficult to be duplicated at home and would just have to be dreamt about.

I had no idea how bloody easy it was to fry cheese, ya'll. I almost didn't believe the recipe could be correct when I first read it, but since I was smack-dab in the middle of the first week of the ELC, and since I had the good fortune of being in possession of the requisite local eggs, goat cheese and baguete, I chalked it up to kismet and commenced to frying.

And it really was THAT easy. You slice the cheese, dip it in egg, coat it in breadcrumbs, chill it so that it retains its shape, and then pan-fry it in a little olive oil.

I'll be a fried chicken. We've been lied to, folks. And I'm not exactly sure who's been doing the lying, but I for one bought the whole shebang. All that stuff they do in restaurants? 'Tain't magic, after all.

You Can Call Me Jane said...

Wow. That sounds and looks delicious- and I'm even under the weather right now. I loooooove goat cheese!

So do you really have purple and yellow eyeglasses?

Thy Hand, goat cheese will soothe what ails you, for sure.

JJ, of course I have purple and yellow eyeglasses. And I love, love, love them (though I think I'm the only who feels that way).

Sarah - bless your pea pickin' lil heart! This sounds great and something I can eat. Happy day. When we get back home (who knows when) I can't wait to try it. Thanks!

In His peace - Cindy
MoM(Mom of Many)

Cindy, thank goodness. I was starting to get a complex about never finding recipes that would work for you. Yay. This is so good, and would be delicious on any crusty whole-wheat bread.

I love warm rounds of chevre. glad to hear they are simple to prepare! they truly are one of those restaurant dishes that really spruce up a salad or an appetizer. yum!

There is nothing better in this world than fried goat cheese. Cannot wait to try this recipe.