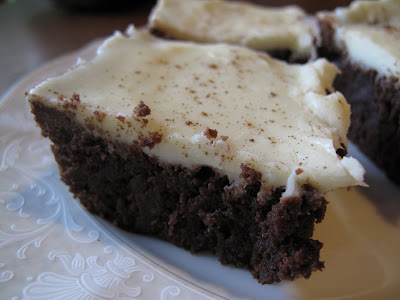 This is only a short list of the justifications that I came up with when I needed a reason to indulge my sweet tooth. There is more, of course, but I would hate to bore anyone with the absurdities that complicate what should be an otherwise serene and lovely life out in the country.

Just know that I had earned these brownies fair and square. It is important no one misunderstand me on this point.

Truly, I just wanted to bake a simple pan of brownies today, something with dark chocolate chips and maybe a handful of nuts, but I also wanted to make some sort of dent in The Recipe Stacks, so I plunged headfirst into my piles of clippings and came up with something called Cappuccino Brownies involving chocolate and instant espresso powder from a back issue of Bon Appetit. How could that be wrong?

Well, except for the added time that comes into play while waiting for not one, but two, layers to cool, of course.

Knitting, thank God, has become my tool of Zen, though, (if it is possible/advisable/understandable to use the words ‘God’ and ‘Zen’ in the same sentence) and now, as difficult as it may be to believe, I am now able to achieve a state of total calm during periods of enforced waiting. I’ve waited my whole life for something like this to come along and make it possible for enforced waits to be something I find to be not only tolerable, but rewarding.

I swear I have not been body snatched. I have achieved a level of patience heretofore undiscovered. Yoga has nothing on knitting, and now, when both kids simultaneously melt down and freak out on me, I yell not. I knit.

All that to say, I did spend the afternoon baking and waiting on these brownies. I was also cooking rice for tonight’s Mozzarella-Stuffed Arancini, and simmering a batch of Fiery Marinara Sauce, so a little extra time in the kitchen wasn’t going to kill me (though the mountain of dirty dishes nearly did me in), and while I waited for the brownies to cool so that I could make the ganache for the top, I knitted.

Then, while the ganache cooled, I made dinner. It was all very efficient. So carefully planned and executed, so Martha Stewart. Once the arancini was in the oven, I cut the brownies and composed a photograph while the natural light was still coming in through the bay window; and then, after an embarrassingly early dinner, I sat down to savor the crowning glory of a day well spent.

And I was completely disappointed. The brownies were, meh, nothing to write home about. I mean, they’re good. They’re more than edible. They could even be described as rather yummy, but they’re just not All That. Not worth the calories. Not worth the time.

Under normal circumstances, I would be devastated by this. Crushed, even.

But I have my newfound Zen-ness to call upon. So I sit. And I knit.

And when I am not sitting in a boat in the middle of Lake Keowee on Thanksgiving Day, fishing and spending some downtime with The Carnivore and the kids, I will be knitting. Maybe it will lessen the blow somewhat.