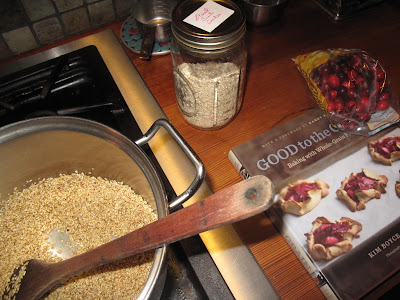 My cookbook collection, I am finally willing to admit, is here to inspire me on techniques rather than recipes.  As much as I love flipping through the pages and admiring the pure fabulousness of the complicated recipes and the beauty of the photographs, I inevitably find that I take one tiny idea from each book and use it to tweak my own recipes.

It was not always this way.  Six or seven years ago, when I was beginning to grasp the awesomeness of creating meals at home (meals that went beyond the ubiquitous black bean and brown rice burrito), I would follow recipes to the letter, schlepping myself to multiple stores in order to source every last ingredient, and then measuring carefully to ensure that I stayed within the lines.

But that gets a bit monotonous after a bit, wouldn't you say?  And expensive.  Too often, I would find myself purchasing herbs or spices that would lose their potency long before I ever used more than a teaspoon-full (Chinese Five Spice Powder, anyone?). It's just silly really.  But the more I cooked, the more I learned to substitute and to re-interpret, to trust my own instincts for tweaking recipes to suit our family's tastes.

There are some general Beam Family rules of thumb that I have learned to keep in the forefront at all times: add an extra 1/4 tsp of salt to almost everything, use dark chocolate anytime the recipe calls for milk chocolate, add a few shakes of Crushed Red Pepper to any recipe with 'spicy' in the title.  Most recipes involving flour (with the exception of cakes) can be altered to use 1/2 all purpose flour and 1/2 whole wheat pastry flour.  Brown rice will win out over white rice every time (as long as you allow for the extra cooking time).  If the recipe looks like it uses too much sugar, it probably does.  Reduce it by 1/4 (unless it's a cake).  One clove of garlic is never enough.

But I will never have enough technique in my arsenal, and I'm always a little bit shocked by the magnitude of difference the tiniest adaptation to execution can make in the finished dish.  Sometimes, the difference cannot even be tasted - it may simply be a matter of time savings or even a reminder to freeze the leftover portion of an ingredient in which only a tiny portion is used.

Clearly, I still have a lot to learn.  I hope to never stop learning, actually.  Isn't that at the point in which you die, after all?  Learn, woman, learn.


In the winter, namely December and January, or at least until fresh cranberries stop showing up at the stores, I eat oatmeal for breakfast.  Oatmeal with walnuts, cranberries, and cinnamon, to be precise.  It's almost a knee-jerk response to the change in the weather.  Without even noticing, I will cease using steamed or baked apples in my oatmeal, and switch to cranberries until that season ends, then I (again without thinking about it much) will begin buying frozen pomegranate seeds until, all of a sudden, the weather warms up, and I start making granola again instead of oatmeal.

Most of the time, it doesn't even bother me that I'm such a creature of habit about breakfast.  Whole wheat pancakes with blueberries & pecans on Saturdays, fried egg sandwiches when I feel like I'm running low on protein (and when I have local eggs in my fridge), oatmeal in the fall and winter, homemade granola in the spring and summer.

Recently though, I picked up some steel-cut oats instead of my usual rolled oats, and I wasn't totally thrilled when I followed the recipe on the box.  The flavor seemed too one-note, it needed a little salt, a small kick of flavor.  I tried adding a little salt on my own (I added way too much) and then I used the tiniest amount of vanilla extract (also not right).  Honey made it too sweet.  Even with the cranberries and walnuts, it seemed like gruel.  Did it need a small amount of fat?  A more elaborate array of spices?

My cookbook collection is relatively diverse, and I can often figure out rather quickly which book(s) to reach for when I need help.  When the CSA gave me too much kale, I went to Moosewood and Mollie Katzen.  When I needed a red velvet cake recipe for Princess Hazelnut's birthday, I had no doubt Southern Living would treat us right.  And when someone gifted me a beautiful bag of rye flour, and when I ran into difficulty with a box of steel-cut oats, I went straight to Good to the Grain, a veritable treasure trove of whole-grain perfection.

And I wasn't disappointed.  The index took me to a recipe for Steel-Cut Oatmeal, and right there, in the head notes at the top of the page was the instruction to toast the oats before cooking them.  Well, of course {slaps forehead}.  As Kim Boyce, the goddess of all things whole grain, states in the recipe, "...these oats are much more flavorful if you give them a quick toast in the pan before longer cooking.  This brings out their natural sweet nuttiness and gives bite to the oats."

Good grief.  What a revelation.  The difference was profound, and now I'm hooked on steel-cut oats.  The texture is so much more interesting than that of rolled oats, and the flavor is richer, nuttier, rounder.

I would be lost as a goose without these cookbooks. 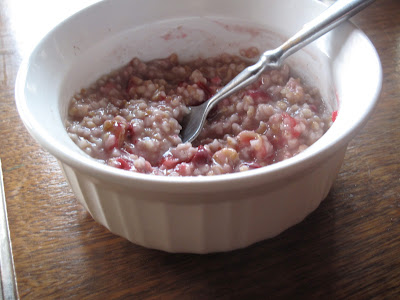 In my house, I'm the only one who eats oatmeal.  I make the full recipe on Monday morning each week, and refrigerate the leftovers, warming up a small bowl full each morning in the microwave (adding a little bit of water to keep it the right consistency), and then topping with the nuts.  This would be terrific to make on the weekend so that you can warm it up in a hurry on rushed weekday mornings.

I was eyeballing that recipe for that very reason---the toasted factor. And now I'm going to get up off the couch and go fix me up a pot of toasty, oaty goodness.

And second, what's up with all the outpouring of writing? A new resolution? Freed-up time? Whatever the case, I like it!

I do not know where these words are coming from, but I am grateful for the chance to channel them to the page. I have missed hanging out here, in this little blog.