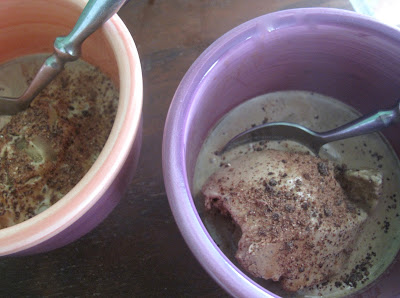 Friends, I had such good intentions.  I knew I would be able to spend some time in here today, and I had so very many things up my sleeve that I have been dying to share.  The wisteria, for one, which spent the better part of the past eight days transforming my yard into a brilliant purple wonderland, and of which I took something like twelve bazillion photographs.  And then there was the pimento cheese recipe that I obtained from Southern Soul BBQ and which I whipped up yesterday and greedily scarfed down for lunch today, piled high atop toasted ciabatta from my favorite local bakery.

Quite seriously, the most perfect pimento cheese recipe and one which I have not been able to stop thinking about since I first fell in love with it at a wedding last month.  Really, I promise to be back here soon with this recipe.  It would be rude to keep it to myself.

Oh, and those roasted sweet potato wedges from last night, all charred and smoky, crispy on the outside, creamy and velvety smooth on the inside; and the date-nut truffles that use neither sugar nor butter and which are simply the most wonderful little bites of healthy decadence...

But then I made a fatal mistake.  I was fooling around on Pinterest (because it is Sunday afternoon and I can waste all the time I want), and I typed 'coffee ice cream' into the search box (silly me) which yielded a recipe for Affogato Mocha.  I am sure it will come as no surprise that, without thinking twice, I put down the computer and went straight to the kitchen (mistake #3, if anyone is still keeping score).

Affogato Mocha, you see, is a very simple and elegant little dessert made up of ice cream drowned in espresso - sort of like a milkshake, only not blended, and much more glorious.  There are countless variations, many of which call for chocolate ice cream or gelato, but it is no secret that I find coffee to be the greatest flavor known to man.

I had coffee ice cream in my freezer, coffee liqueur in the pantry, a tiny container of grated dark chocolate in the refrigerator, and a French Press just waiting to be filled with double-strength coffee.  It was fate.  I would have been mad to resist.

Within minutes, the adults in the house were in a state of bliss, slurping up the last drops of this luscious and sinful easy little dessert.  I would have been remiss to not run straight here to share it with you.  Cheers. 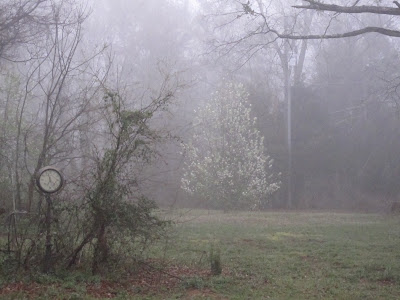 Every year, I am shocked and appalled at how busy I am from mid-January through late March.  And every year, almost without fail, Spring sneaks up on me from out behind the cold, gray late winter days, and it jumps out in front with a wild explosion of wisteria, the quirky droning sound of busy little bumblebees, the surprise onset of thick, fluffy grass, and days so beautiful they take my breath away.

The doors are flung open all day long now, and the sun feels so delicious.  The grand busy-ness of my work season is abating (though not quite gone yet), and I steal moments where I can.

There have been entirely too many, "No, honey, mama is too busy right now," conversations in the house lately, and an abysmal lack of time for anything unrelated to the barebones basics of our homeschooling routine or to the accounting/taxation side of my life. 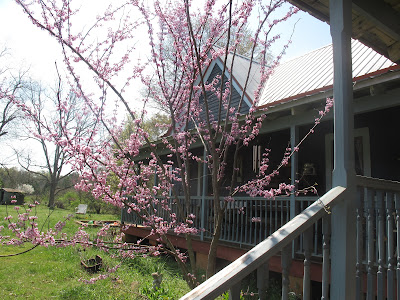 But we are master moment-stealers, and our schedules are beginning to find some margin again.  Time for reading stories together, time to play with the members of our reptilian menagerie, time for baking mostly-healthy-but-slightly-decadent treats, time for bloom-gazing.  Time for each other.  Oh, Springtime, we are so pleased to see you again. 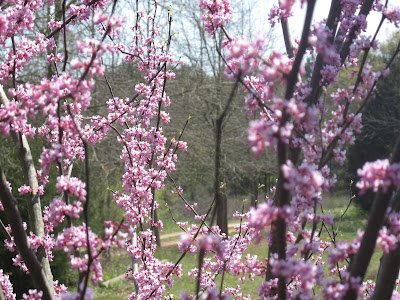 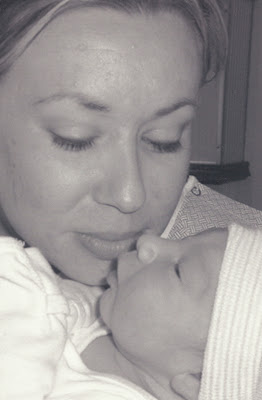 Eight years ago, our first child decided he wanted to be born two weeks early.  We were woefully unprepared.  The Money Pit house would not be completed for another six weeks, which meant we were bringing our little boy home from the hospital to the ancient little trailer we were living in during the renovation.  The delays on the house also meant that I had delayed purchasing a new (used) car because I am allergic to making too many financial decisions at one time.  This particular issue was a big one.  My beloved CRX did not have a backseat.

I had contractions on and off all that day, and I was absurdly active from dawn to dusk.  We ate dinner that evening, and settled in to watch a movie (I wish I remembered which one), but before the first preview was over, I doubled over with my first Very Real Contraction.  When it passed, I shrugged and reached for a doughnut.  Within minutes, another Very Real Contraction came.  The Carnivore looked at me.  I stared blankly back at him.

After the next Very Real Contraction, we began to time them, watching in disbelief as we began to fill the page with times that were consistently within five minutes of each other.  We called the doctor, told him how closely the contractions were coming, and he said to head to the hospital immediately.

We argued with him, of course.  We still had two weeks to go, you see.  And it was late evening on February 28, and the following day was February 29, and we couldn't possibly have this baby on Leap Day.  Besides, they were probably just going to send us home after a few hours and tell us it was false labor, right?  RIGHT?

The doctor laughed.  "You're having this baby, tonight," he said.  "It's time to come to the hospital now."

The Carnivore looked at me.  Again, I stared blankly back at him, before doubling over with another Very Real, Very Painful Contraction.  "I haven't packed yet," I cried.  "We haven't bought a bigger car yet," I whimpered.

I called my mother.  "But America's Most Wanted is about to come on," she complained.  "Besides, first babies never come early."

Princess of Denial, allow me to introduce you to your mother, The Queen of Denial.

The Boy Wonder was born in the early morning hours of February 29, 2004, and this week, he officially turned two.  He is an unusual child, with an unusual birthday, and we celebrated him all week long.  In an unusual fashion, of course. 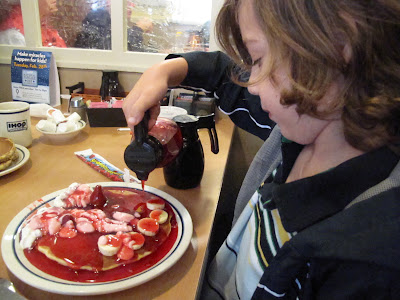 Create-a-Face pancakes for breakfast, with puddles of artificially-colored and artificially-flavored strawberry syrup?  Yes. 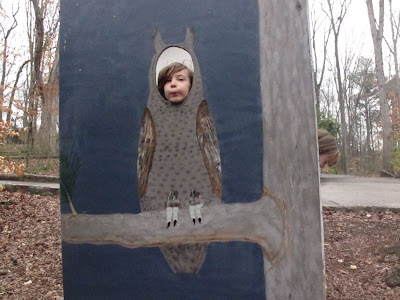 A drizzly day ambling slowly through our small local zoo, hooting like an owl?  Yes. 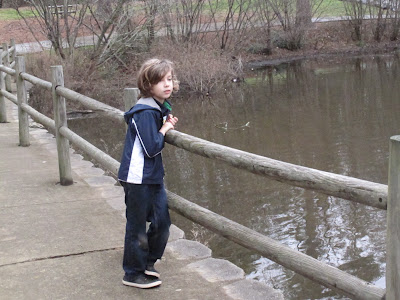 Time to dawdle and watch the ducks?  Yes. 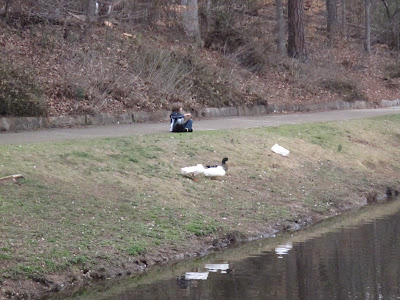 Time to dawdle with the ducks?  Yes. 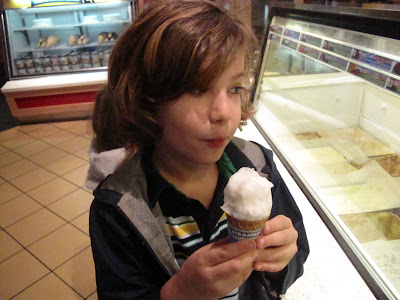 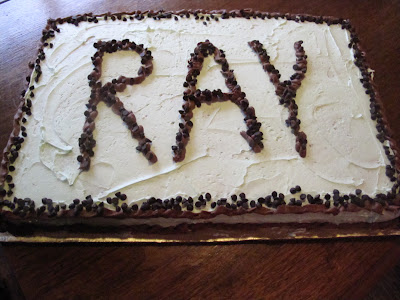 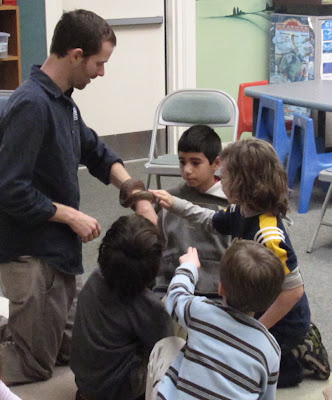 A birthday party at the Nature Center where you can pet snakes and go on a nature walk and introduce your friends and cousins to one of your very favorite places on earth?  Yes, yes, and yes.
Happy Birthday, my dear funny little son.  Thank you for keeping us on our toes from the very beginning.  Thank you for being patient while we learned how to be parents.  Thank you for being you.   "Today you are You, that is truer than true.  There is no one alive who is Youer than You."
Posted by Sarah Beam at 9:26 PM 2 comments: