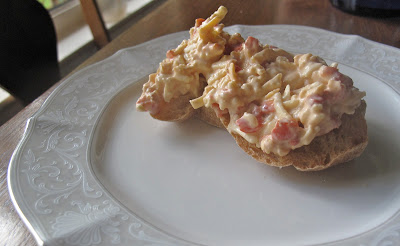 Pimento cheese has been rising in esteem amongst food writers as of late, and I say it is about time.  Done right, pimento cheese can be a thing of beauty.  It can be fresh, a little spicy, and even - dare I say it - elegant.

However, the ways in which this spread can be done wrong are myriad, and I am loathe to focus on that too much because I am, after all, bringing to you The Single Best Recipe for Pimento Cheese in the World.

I kid you not.  This is Best-in-Show kind of stuff.

Everyone is familiar with pimento cheese, right?  It is that simple spread of grated cheddar cheese, mayonnaise, salt, and pimentos that you find on tiny finger sandwiches and on the menus of old-fashioned Southern diners and even, nowadays, hip, modern restaurants.  It is, sadly, sometimes that gloppy stuff you have sneered at when it has been handed to you on soft bread and which you thought might just kill you if you had to take one more bite of the uni-textured nonsense.

It can also be that well-balanced, sharp, slightly spicy spread that you had on extra-crusty crostini at a wedding reception and that you sent your husband on a quest to find three more pieces of for you.  It can even be that perfect appetizer you dived into so lustily that you dribbled a little bit on your dress and got some in your hair.

But that would only happen if you were a little klutzy to begin with and you were laughing so hard at some of your husband's hilarious friends that it was tough to do anything gracefully, much less scarf down a plateful of perfect pimento cheese on toast.

The wedding, you see, was that of one of the owners of Southern Soul Barbecue on St. Simon's Island, and the food, as one would expect, was revelatory.  There were collard greens redolent of brown sugar, crisp and tart house-made pickles, Hoppin' John that was so rich and well-seasoned I may or may not have had to go for seconds, and, of course, barbecue.

I don't eat meat, but there is no shortage of love for their BBQ. 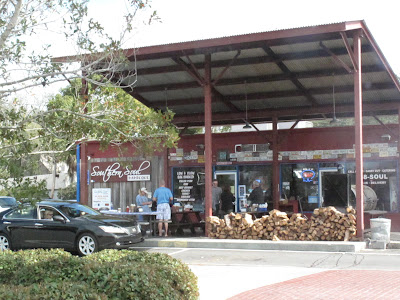 The swoon-inducing pimento cheese was a thing of dreams though, and when, a month later, I was still talking about it, I finally broke down and emailed Griffin to see if I could not only obtain the recipe, but could also share it here.

Griffin's a good man.  The recipe was in my hands by the next morning, and I was happily whipping up a batch before lunchtime.  His recipe is a thing of genius, eschewing the usual canned pimentos for freshly-roasted red bell peppers, and including a little cream cheese and a little Texas Pete. 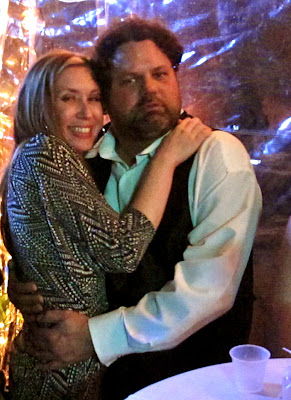 God bless the Texas Pete.  The spicy kick is exquisite, and it provides both a foil to the richness of the cream cheese and another note of flavor to the finished mixture.
I reduced the mayo a wee bit to get the right balance for the scaled-down version of the recipe, and that is how I present it below.  As for serving, may I strongly recommend spreading the Pimento Cheese on something crispy?  This is a soft-textured and rich spread, and it benefits greatly from being paired with thin, well-toasted slices of baguette or ciabatta bread, or a crispy cracker if you are so inclined.  A light sprinkling of coarse sea salt to finish it elevates the perfection.