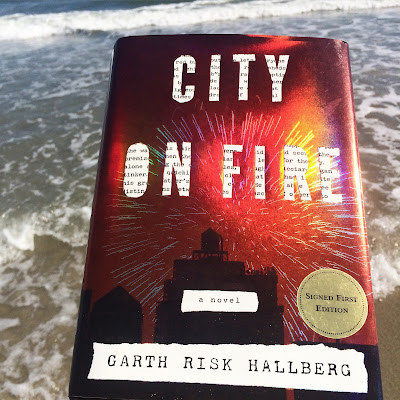 The last few books I have read are an interesting cross-section: a 900-page work of genius literary fiction, a breathtaking work of non-fiction, a primer on nutrition, and a disappointing Chick Lit novel that, with better editing, could have been so much more.

Fiction specifically targeted towards women causes me more consternation than it probably should.  There was a time, in my early-twenties, I guess, when books like Bridget Jones' Diary cracked me up but didn't yet insult my intelligence.  Now though, I get a little cranky by anything that comes off as either too breezy or too romance-y.  What I can't quite put my finger on is whether my irritation stems from run-of-the-mill snobbishness, whether I have just outgrown that sort of novel, or whether those books are truly not any good and aren't worth my time.

Today I am linking up with Modern Mrs. Darcy to share short reviews of the books I have read over the past four weeks. 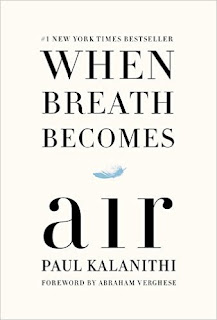 When Breath Becomes Air is a profound and deeply moving meditation on life and death, on becoming a doctor and simultaneously becoming a terminal patient, on what it means to have faith and hope and on what it means to say goodbye. The writing is at once mesmerizing and matter-of-fact, and though the book is short, it is still powerful and important.. Kalanithi succumbed to cancer before he finished writing his book, and his wife wrote the final chapter. Bring tissues. 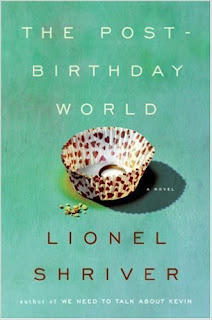 I picked up The Post-Birthday World after hearing it described as a "beach read with substance" on the podcast What Should I Read Next. The novel is structured around alternate futures for the main character, a la Sliding Doors, and is written in a style I can only describe as an attempt at edgy, feminist-tinged Chick Lit (descriptives that have very little business being used in the same sentence). An American of Russian descent living in London, Irina faces a pivotal decision to continue her safe, albeit slightly stodgy life with her long-time "safe" boyfriend, or to begin an ill-advised (but seemingly fascinating) affair with a famous snooker player and to leave behind her life to start anew. While I greatly appreciate the concept (and generally can't get enough of this sort of structure), the protagonist never quite appealed to me and the language was more than little discordant. The final chapter, however, is a thing of beauty and leaves the reader enough room to wonder which door had indeed been chosen. If you like Chick Lit, I recommend this, but with reservations (and only if you are not offended by crass language in regards to sex). If Chick Lit isn't your thing though, keep moving. 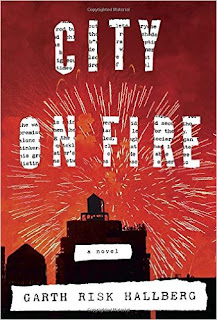 City on Fire is a work of ambitious literary fiction that is not to be entered into lightly. At 900-something pages, a small portion of which are in zine form and some of which are in magazine article form, and spanning a dizzying array of diverse characters, I felt frustrated at times by its grandness of scope, but was well-rewarded for following it to the end (as a matter of fact, when I finished the last line, I turned right back to page one and re-read the prologue). The novel is set in NYC and Long Island during the 1970s, and dips into the lives of a police detective, a fire worker, a group of anarchistic punks, a wealthy and powerful family, a couple of disaffected teens from the suburbs. Many themes are tackled, including race, homosexuality, drug abuse, loneliness, adultery - well, now that I think about it, this list could go on for days. Amazingly, it all works - all the characters, all the themes, and even all the pages. While it takes the first half of the book before the reader even has a full sense of what on earth is going on, the second half moves much faster, zeroing in on the action of one particular night during the New York City blackout of 1977. The writing is superb, the setting is rich and highly evocative, the ending is a thing of beauty, and the author's ability to deftly pull it all together is a masterclass in fiction writing. 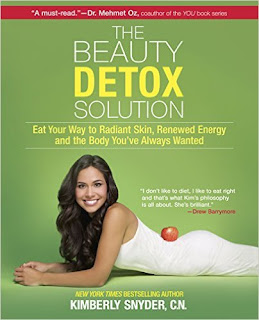 The Beauty Detox Solution, written by popular Certified Nutritionist Kimberly Snyder, is an excellent primer on holistic nutrition that delves relatively deeply into the science without overwhelming or boring the reader. The heavy use of the word 'beauty' can be a little tiresome, but is easily forgiven since the target audience is one who might be interested in eating better purely to lose weight and improve their skin. The nutritional information is sound, and ample recipes are provided (though the recipes will only be useful if the reader loves avocados). It is an easy read, and I would not hesitate to recommend it to anyone wanting to learn more about Ayurvedic and holistic, mostly-vegetarian nutrition.

I really liked When Breath Becomes Air. His perspective was so interesting and valuable. I fell apart at the epilogue. though. What an amazing man.

I keep hearing about City on Fire but 900-something pages seems so daunting!

Here are my June reads: https://elle-alice.blogspot.com/2016/06/june-book-reviews.html